Ignite & Reconnect With Your Inner Goddess 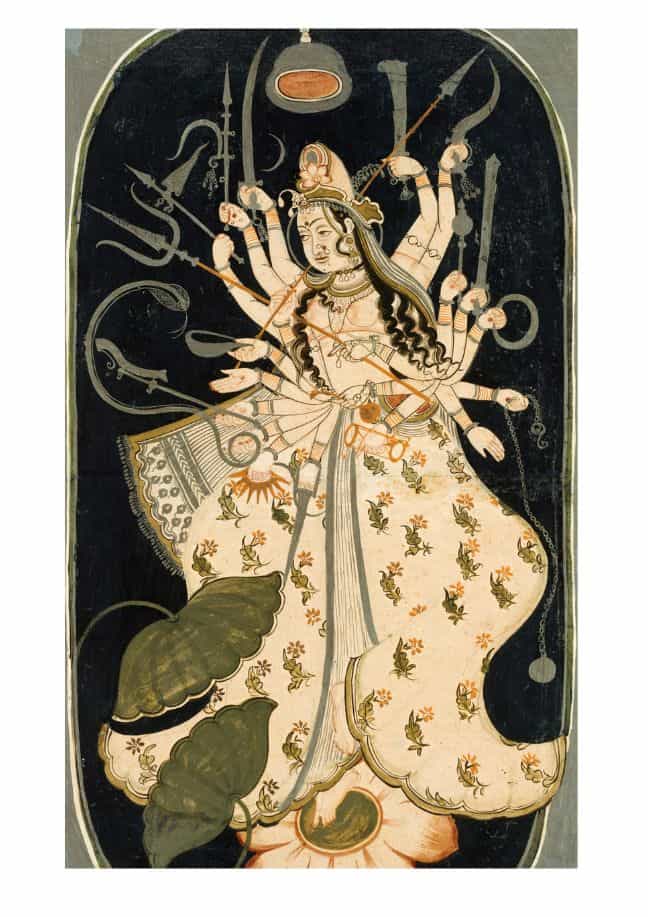 In Ancient Tantric traditions and still practiced today, the Goddess is the embodiment of our energetic inner power. During yogic practice, breath-work and meditation the Goddess can be spontaneously felt, invoked during exploring throughout your practice. This energy can awaken within us an inner source of empowerment.

The yogic sages, priests, priestesses, practitioners, exercised and experienced this Tantric Goddess energy, the vibrational energy that is explained in quantum physics. The invocation of the Divine feminine begins with Shakti. Shakti is the journey the dance to rediscovering one self and the ultimate union with Shiva.

The awakening of Shakti, which activates deeper inner exploration, perception and transformation in the body and mind. Is the goal of Tantra and Kundalini yoga. The lost connection that we have fallen back from.

The Hindu traditions believe that the Goddess manifests in different Divine forms, the different aspects of the goddess. Shakti, the formless source takes forms—as several goddesses, roles of the different energies that make up the world and our own consciousness.

In Indian and Buddhist traditions the Divine Feminine "Goddess" is highly respected. Understanding the concept of a Goddess allows us to experience a different aspect of the cosmic world. The energies that can be attained to increase a deeper relationship with self.

Goddesses were worshipped in many locations around the World. The famous psychologist Carl Jung, used Greek Gods and Goddesses as archetypes for psychological insight in his counselling practice and in several books that he has written. The Hindu deities, are a symbolic form, that  allows our intuitive abilities to develop.

The archetypes and symbolic forms, of the Hindu deities represent human behaviours that can bring to light deep transformation that lies hidden deep within.

The goddess energies—the devis  of the Indian tradition. The Goddess represents all  genders, men as well as women can attain these enlightening forces.

Learn how to Embody your Inner Goddess.

Radiate the frequency of Love.

Connect with deeper perception and insights.

The Supreme Goddesses that are worked with the most in the Hinduism traditions are Shakti, Durga, Kali, Laksmi, and Saraswati. That hold many attributes that we can identify with.  The power of strength, beauty, sensuality,  creation, ignition, creation, beauty, destruction, wisdom and much more.

The connection with manifesting the Goddess into your life is about learning how to work with the different Archetypes and how to bring them into balance.  The Union of Shakti and Shiva the Divine Feminine and Divine Masculine qualities embraced in neutrality.

The stories of these Goddesses at times can seem unreal and difficult to understand. But it is the symbology, of the message that we are contemplating and focusing on retrieving from the story that is being told.

Realizing that many times these Goddesses , and Gods are trying to relay the information or the lesson from their experience and how it can relate at times to our current life situations. Contemplating it this way we can take the message and understand our own attributes and how these influence our circumstances and situations in life, with our self and everyday relationships. 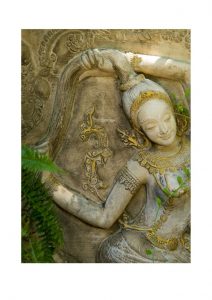 Durga, her name means the cosmic warrior and she is hard to conquer. She destroys the barriers that keep us stuck such as fear, lack of confidence, ignorance, and darkness. She helps create self empowerment through inner strength, building self esteem, she clears negativity, and slays the destructive traits that can be held onto for years. She helps confront challenging situations through grounding.

Durga rides a lion, and her arms hold weapons, which she uses to slay the negative forces.  She removes the veil that blinds us of our true essence and the illusions.

Laksmi, represents abundance, not so much fame and fortune but the richness of our soul. She helps with attaining our true desires. She also represents beauty, blissfulness, harmony, and love.

Saraswati, means the flowing essence.  Symbolizing confidence, beauty, seeking truth and connection with nature and our true essence.  Saraswati plays the music of love on a string instrument called the veena. She is dressed in white - the symbol of purity and is seen with a white swan.

She embodies speech, wisdom, and inspiration. She opens us to seeing the world as a canvas where we can create our life story. 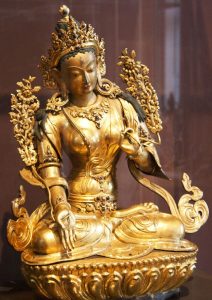 Certain Goddesses may be considered a dark goddess, not necessarily that she is out to do harm, no, not at all. What she represents is the Dark Shadow aspect that is hidden deep within us.  For instance Goddess Kali can help retrieve the negative traits that live blocked within and help bring up what no longer serves us.

Each Goddess represent energies that are expressed in our life situations  physical, intellectual, emotional, and spiritual.

Learning how to understand and how to face our challenges is how these energies can break down barriers. 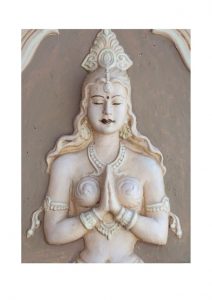 Enlightenment with the Goddess

Deity yoga is a powerful technique to free away stagnant energies, the shadow that lurks within and to learn how to understand how to work with the different archetypal energies that each aspect represents.

Invoking the goddesses as her Divine source represents, our own  subtle energy that lives within us. When awakened our spiritual journey towards inner transformation begins.

Embarking on this journey is for diving deep into understanding a deeper form of Yogic philosophy, and ancient teachings. It takes trust to want to explore these energies that can teach so much. Embrace divine energy that is liberating, ready, and willing to be received.